There's no getting away from the fact that it was a disappointing start to the season for Coventry Sphinx. After a positive summer, seeing the team knocked out of the FA Cup at the first opportunity was difficult to swallow. With important players missing in key positions, I'd been expecting a tricky afternoon. We got that and more.

The Sphinx were second best all over the park for all but a couple of patches of our match against Boldmere St Michael's, who arrived confident and played a disciplined, physical game. We conceded two sloppy goals in the second half, and that was that.

Yet it could still have gone our way. Although it often seemed the Sphinx were struggling for an edge, the boys created some very presentable chances. In the first half, we hit the post and were foiled by a double save within a few seconds. Late in the second Ryan Harkin sashayed through Boldmere's back line and forced another decent save.

The game turned on a moment in between those two opportunities. At the very beginning of the second period Harkin went through and took it past the goalkeeper, only to find himself on the wrong end of a fabulous last-ditch tackle. The visitors scored almost immediately; from 1-0 looking certain to Boldmere leading 0-1 in the blink of an eye.

The Midland League game at Haughmond last weekend was a welcome improvement, and the 1-1 draw a result I suspect plenty of teams will struggle to better in Shrewsbury this season. The Sphinx took a while to get going and fell behind to an emphatically finished goal in the first half, but were the better side in the second half.

We got our equaliser in somewhat fortuitous circumstances. Harkin pounced on an error and did well to keep the opportunity alive and then force the ball over the line despite the determined efforts of Haughmond goalkeeper Ash Spittlehouse.

The goal twisted the game in the Sphinx's favour and transformed our sometimes forlorn second half supremacy into a genuine chance of an opening day victory on the road.

Our boys pushed for three points while Haughmond seemed to settle for one, and it was only a sensational save from Spittlehouse that earned it for them. Harkin had a few sights of goal late in the game, and the best attempt was curling into the top corner and looked a goal all day long until the goalkeeper somehow clawed it away.

Haughmond looked quite a decent side, assured in most departments and able to use their width well. They can move the ball quickly and they'll do a bit of damage this season on a terrific pitch. Some of the league's more agricultural teams might just find their inability to use it costing them a point or three over there this year. 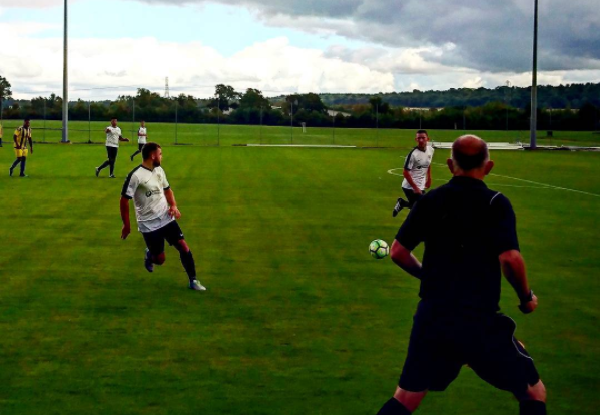 With Scott Lower and Aaron Stringfellow back in the full back spots and Matty Burt slotting in next to Michael Quirke at centre back, the Sphinx looked much more robust in defence than they did against Boldmere, and left Haughmond feeding off scraps even during our poorer spells.

Callum Woodward and Liam Cairns did some fantastic work in central midfield, and Luke Downes mixed his own tenacity with some inventive play and a few clever runs that could have given us a real threat in behind the Haughmond full backs. In the second half especially, Alex Tomkinson began to control the game in dangerous areas and gave the opposition a good deal of defensive thinking to do.

Such was the swing in our favour in the last thirty minutes that I wasn't particularly happy to be leaving with a point, but it won't be the worst result a team gets at Haughmond this season. The second half performance was a big step forwards after the Cup loss, and gives us reason enough to be optimistic about the imminent games.

Our home campaign begins tonight against Shepshed Dynamo, whose league opener saw a first half demolition of Shawbury United on Saturday. A 4-1 win was secured thanks to four goals in the first 33 minutes, a level of production we'll need to be wary of at Sphinx Drive this evening.

Last season's win over Shepshed felt like a turning point. We went on to beat Shawbury and gradually started to pick up points more consistently, settling nicely in mid-table before kicking on with some big wins just when we needed them to stay there.

A similar result tonight would be just the ticket.