Three consecutive Coventry Sphinx wins became four thanks to our first ever win over Sporting Khalsa on September 2nd. It was a testing afternoon and a win that showed the depth of belief these players have in themselves and in each other.

They started slowly and fell behind to Khalsa in the first half and also lost both Callum Woodward and Chris Sterling to injury, yet they took a 2-1 lead in at the break. Louis Guest scored the equaliser, turning in a pinpoint header after Ryan Harkin had hooked the ball back towards goal to keep a set piece alive.

Harkin then scored himself to put the Sphinx in front, taking advantage of  a brilliant through-ball from substitute Rhys Deehan and Khalsa's inability to defend it. His left-footed finish through the goalkeeper's legs oozed confidence.

In truth, the second half display was more about determination and a little good luck than domination. Deehan, Nathan McGarrity and Jean Dakouri, along with the assortment of players who ended up playing for spells at the back, got through a mountain of work after the questionable sending off of Michael Quirke.

But it was the Sphinx's day again. The strikers, Harkin and debutant Demetri Brown - on to replace Sterling in the first half - had also had to put in a shift and were rewarded with one final slice of fortune to balance out the red card. 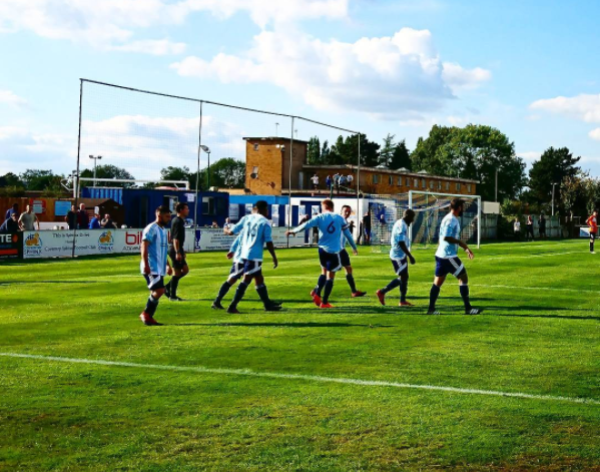 Former Sphinx man Jon Haynes slipped under pressure from Harkin, who rounded the goalkeeper and finished calmly to end the contest. The win took us to fourth in the table and proved again that no team in this division should take us lightly, a point that was reinforced by our goalless draw against Rugby Town last Tuesday.

Torrential rain dominated the pre-match chatter at Butlin Road as a Sphinx starting eleven without Scott Lower, Woodward and Sterling prepared for a testing fixture

The changes had an impact; the Sphinx were second best throughout the first period and struggled to gain any momentum. One chance came back off the line but Rugby were in control. Despite that, Scott Dutton had little meaningful work to do between the sticks.

After half time it was an altogether different story. Our midfield clicked thanks to another impressive second half display from Dakouri, McGarrity's work rate, Alex Tomkinson's all-action style and a cameo from substitute Luke Downes that totally turned the game in our favour. Better performances up front did us no harm either, and Harkin came to life as we looked to win the game.

To come away disappointed with a point against Rugby might sound entitled, but the fact of the matter is the second half and the majority of its chances belonged to the Sphinx. We came close on a few occasions, but not close enough.

The Rugby game was the last without manager Stuart Dutton in the dugout, and credit must go to the lads who've stepped up to oversee such a good run of results. Nevertheless, it's great to have the Big Dog back where he belongs.

His first game there didn't go our way, unfortunately. Saturday's FA Vase exit at the hands of Heather St John's couldn't have been more frustrating.

The Sphinx's inability to look after the ball and take control of the game was punctuated by the gifting of two Heather goals. They returned the favour but what turned into a crap shoot should have been winnable.

Instead, the team led only once in a game of nine goals. Harkin's roofed finish in stoppage time put an end to Heather's quest to kill the clock, but there was to be one last kick in the teeth. Heather scored with the last touch of the game to make it 5-4, finally making use of the chances we gave them.

To lose in those circumstances is a horrible thing to experience. It wasn't a good performance but coming from behind three times and getting the scoreline back to 4-4 isn't to be taken lightly. I felt that the referee should have blown the final whistle before Heather's winner, but the truth is we got the nothing we deserved.

We face Heanor Town this evening and it's an opportunity to bounce back and show what we're made of. Our last meeting with them was a fine template for exactly that. With a makeshift side and in very difficult conditions, the Sphinx ground out a terrific win against a side with a very decent home record.

The team will need to show similar guts tonight to chuck three more points in the bank and put Saturday behind them quickly. We're rarely found wanting in that regard. Up the Sphinx!