Coventry Sphinx kick off today's match against Sporting Khalsa on the back of three wins and what's become a very decent start to the season.

After coming within a whisker of beating Haughmond on opening day, missing out in frustrating circumstances against Shepshed Dynamo and beating Rocester, the August Bank Holiday kicked us up to fifth in the league table.

The weekend began with a fantastic result here at Sphinx Drive. Newly promoted Bromsgrove Sporting hadn't lost a league game since April 2016, a remarkable achievement that wholly encompassed their unbeaten 2016/17 campaign. That run came to an end in a rollercoaster afternoon.

The boys were terrific in the first half despite the absence of suspended pair Luke Downes and Matty Burt. Bromsgrove were limited to speculative crosses at one end while we made headway at the other, eventually breaking the deadlock thanks to Chris Sterling's polished flick and finish.

Rhys Deehan started the move with a lovely turn, and Ryan Harkin's lung-busting run took three or four opponents out of the game before he picked Sterling out to add the final touch.

A few minutes later, and right on the stroke of half time, the game swung even further in the Sphinx's favour. Harkin got in behind and his pace caught goalkeeper Reece Francis short just outside his penalty area.

We'll probably never know whether he was dismissed for serious foul play or denial of an obvious goalscoring opportunity, but both applied. When you go in like that, winning the ball is neither here nor there.

It's fair to say the second half didn't go as I'd expected. Defender Aaron Roberts had replaced Francis in goal and it didn't take long before his discomfort was made plain, but he was barely tested as Bromsgrove's ten men took the initiative. Our defenders were asked to do far more work than they should have, but they did it well; Louis Guest was my Man of the Match.

The visitors missed a penalty kick at 1-0 and were, finally, breached for a second time. Harkin's day of fun and games with the assistant referee's flag continued as he broke through on goal, sat stand-in goalkeeper Roberts down, and slotted home the crucial goal.

It was hard work at times, and we rarely looked like we had the extra man, but Bromsgrove now know defeat.

Loughborough University don't have anything like that record, but they have a pretty handy history in home games against the Sphinx. They, too, were turned over in our second game of last weekend. Monday brought another clean sheet and a 1-0 win courtesy of a Harkin goal. 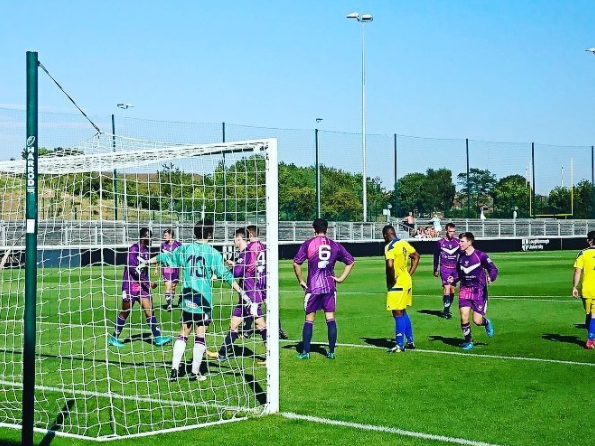 The striker was in the right place at the right time to dump the ball into the net after he and Sterling had both broken the offside trap to make the most of a deft through ball by Callum Woodward.

Sterling turned towards goal and forced a save from Loughborough's substitute goalkeeper - their first choice was carried off after a wayward back-pass produced a determined save and a rather unfortunate collision with the post - and Harkin was on hand to bury the rebound.

Despite looking largely toothless and resorting to a string of snatched shots that had gym-goers ducking on the treadmills above the terrace, the hosts had a couple of decent chances and found goalkeeper Scott Dutton in good form.

For the Sphinx, whose starting eleven all featured in the Bromsgrove game, the task at hand was to overcome the fatigue of two games in three days and the searing heat of a summer's day that actually looked and felt like a summer's day.

It wasn't pretty and it certainly wasn't easy, but the team stuck to the job and got it done. Guest was again the ringleader in a good performance at the back, while Jean Dakouri's second half was the best I've seen of him in a Sphinx shirt. Woodward's influence in midfield showed again as we took our weekend tally to the maximum of six points.

Add in the three from Rocester and we're in a good little patch of form. Our game today will be as big a challenge as we've faced so far this year. Sporting Khalsa haven't had the start they'd have wanted but they're reliably difficult opposition.

Luckily, I fancy this Sphinx side to give even the best teams in the league a game if we perform to our best. And if you can be that kind of team, there's no reason to fear anyone.