Lee Knibbs' run of consecutive wins stretched to four matches in our most recent home outing, a 5-0 victory over Quorn way back on November 4th.

The first half took a while to get going and neither side were able to take control of the game, until one did. It was ours, and it was emphatic. In the space of two minutes late in the half, the Sphinx scored twice and the second was very nearly a carbon copy of the first.

Charlie Faulkner made both with a pair of inch-perfect through balls, and both were deftly swept into the bottom corner by Ryan Harkin.

In the second half Jamie Towers went clear to squeeze the ball under Quorn's goalkeeper for the third, before Faulkner - whose performance was one of several top class showings that afternoon - buried a fantastic header for 4-0.

The fifth was no more than the team deserved. From a free kick in the corner, a speculative shot ricocheted up in the air right in front of Towers, whose header was thwarted by a superb save by the 'keeper. Callum Woodward was on hand to tap in from close range and round off a superb win.

If win number four was comfortable, number five was anything but. A 3-2 win at South Normanton Athletic was earned by way of a significant show of defensive character but it should have been dead and buried inside the first half.

South Normanton's high defensive line played into our hands from the first whistle. Aaron Donaldson made the most of his start, sending Harkin clear of a poor offside trap to finish neatly, and then showing skill and tenacity in winning the penalty that Woody swept home to make it 2-0.

Faulkner had seen a goal disallowed in between - wrongly, from my perspective - but the Sphinx were rampant and got their third when Harkin, again embarrassing the high line resolutely employed by our erstwhile hosts, squeezed his second under the goalkeeper.

It was a fabulous first half performance in which the team scored three times, four if you throw in the one that was scrubbed off, and could have had another three or four. It's no exaggeration to say that South Normanton were torn apart and shouldn't have been in the game.

But, when we gave them a sloppy goal before half time, the onslaught that followed was inevitable. Our two-goal advantage could have been a lot more; instead the home side pushed us hard and pulled another goal back with 25 minutes remaining.

It was an incredibly stressful half-hour on the sidelines, but the men on the pitch dug deep and got their business done.

The winning run continued at AFC Wulfrunians, where a delayed kick-off saw the Sphinx batter our hosts from start to finish, eventually settling for a 5-0 win that could have been much more comprehensive. The Wulfrunians goalkeeper had a decent game. 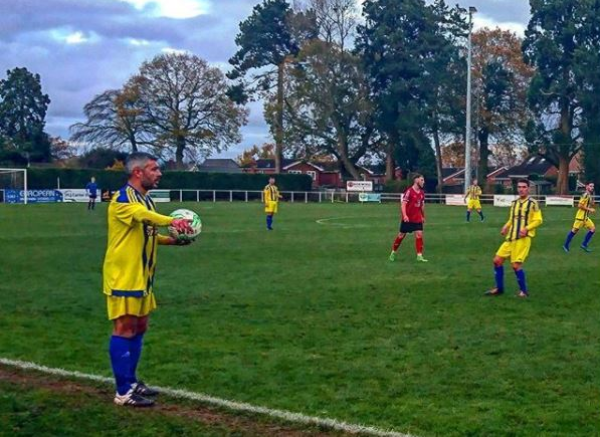 Again, the team went 3-0 up in an emphatic first half. Not conceding made such a difference, and Wulfrunians never had a sniff of getting back into the game. Two goals each from Harkin and Towers, and one from Donaldson, rewarded the side for a classy performance. The defence kept things solid, and Jake Allingan made one great save to keep his sheet clean.

And then, with the Sphinx in full flight and feeling invincible, we had an impromptu four-week break. The weather put paid to our trips to Shawbury United and Bromsgrove Sporting, and, with Highgate United busy elsewhere, the winter gap was longer than we'd have hoped.

We eventually got back into action with an away game at Long Eaton United, where our historical form is poor, and whose victory at Sphinx Drive a few months ago represents the season's low point.

With that in mind, it was an afternoon for perspective. Although our run of consecutive wins came to an end and the performance was short of our best, a point at Long Eaton is not to be sniffed at. More pleasingly, the team's character was evident once again and Allingan had a fantastic second half.

Faulkner's confident finish gave us the lead just after half time but Long Eaton took the game by the scruff of the neck and were unfortunate to have to settle for a point. Ring rust helped them, for sure, and we're now talking about an unbeaten run rather than a winning one. I have no complaints about that.