Coventry Sphinx's festive period got underway in the best possible style and the results continued right up to the end of December. Lye Town are always a tough nut to crack, but the Sphinx weren't going to be denied a few weeks back despite going behind to a first half penalty.

To go in at half time behind and win the game 4-1 is quite a turnaround, and all four goals came in the space of seven minutes. Ryan Harkin missed a penalty but more than made up for it with clever finishes for the third and fourth goals, which put the game well beyond Lye.

Charlie Faulkner was instrumental in the first two. His pinpoint corner was brilliantly headed beyond goalkeeper Tom Turner by Louis Guest, and he smashed in a thumping drive that clipped the crossbar before dropping over the line to make it 2-1.

It was an irresistible blitz and a very satisfying way to put the game to bed against a team who came with little intent other than helping the game to deteriorate into a war.

The tone was set by Lye's Dan Flowers, whose early foul could easily have resulted in a red card rather than yellow, and it was no surprise at all to see a pair of red cards before the goalscoring began.

The truth is we were lucky the incident played out as it did. Callum Woodward's foul on Flowers earned his dismissal, and would have left us a man short were it not for the retaliation that added a straight red to Flowers' collection of Christmas cards.

In games like that, teams that can play have to earn the right to do so. Sphinx did that against Lye, and got the rewards they deserved against what I'll charitably describe as one of 'those' teams.

Boxing Day's game was a visit to league leaders Coleshill Town and resulted in a very satisfactory 2-2 draw. Coleshill took advantage of their spell on top of the first half proceedings, taking a 2-0 lead that should have put them in charge.

But an awful challenge on Liam Cairns earned a straight red card for Coleshill captain Joe Halsall and tipped the game slightly in our favour at just the right time. Amongst the away support there was a feeling that there was still something in the match for Sphinx, and so it proved.

The second half performance showed terrific guts, not for the first time this season. To take on a side of Coleshill's quality on their own patch and claw back a point after being two goals down is seriously impressive, ten men or not.

Sphinx's pressure told when Guest once again climbed to head in from a corner to make it 2-1, and from that moment we were in the ascendancy. Harkin had endured a frustrating match but made some excellent runs throughout the afternoon, and was eventually up-ended in the Coleshill box.

Woodward signed off for his suspension in style, rolling in the calmest of penalty kicks under pressure to save the point and maintain our unbeaten run.

A few days later the streak continued and Sphinx stepped up into fourth place in the league table. A 4-3 home win over another team from Coventry was a wonderful way to end the year and the aftermath was enjoyable.

The game, for those of us with an interest in the outcome, was anything but. It's tough to analyse a match like this one but the closest summary I can find is that our lot built an early two-goal cushion and kept themselves a goal ahead of the other lot despite 70-odd minutes of pressure.

Chris Sterling's first start since returning from injury got him two goals and a feature in The Non-League Paper. He forced the opener over the line in the first minute, and then tucked in the coolest of penalties after Harkin had been fouled.

Sphinx's third and fourth were headers from Faulkner set plays. Michael Quirke headed in off the crossbar from a corner and Jamie Towers glanced in a clever finish from a free kick to end our scoring for the afternoon.

All the while our visitors kept piling forward, enjoying most of the ball and staying within touching distance throughout. We gave away a few goals but the resilience at the back was decent, and you can't win more than three points, can you? So who cares?

It was a terrific effort all round. To the volunteers who worked so hard to get the game on, to the matchday team who brilliantly managed a hefty crowd, to the management and players who delivered a derby victory and a tenth unbeaten league game - thank you from the supporters. We owe you one. 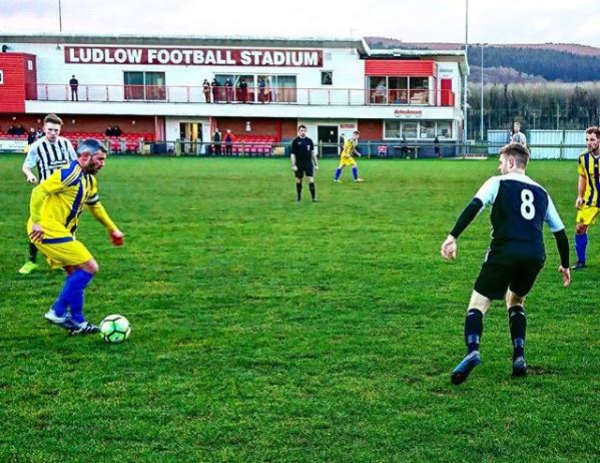 Despite continuing our unbeaten run last weekend, we come into today's game against Loughborough University with a point to prove after a disappointing display at Shawbury United last weekend.

The 0-0 draw proved that there are no soft touches in this division at the moment, and we were lucky to come away with a point. The team has earned some credit with supporters this season and used a good slice of it in Ludlow. For the first time in this purple patch we took a game for granted and it nearly bit us even harder than it did.

Today we have a chance to put that right. Our home form has been really good and the recent wins showed what we can do. I hope we do it again this afternoon.