When the fixtures fly by thick and fast, it's easy to get swept up in the immediate moment and forget to take a step back and appreciate the season as a whole. For Coventry Sphinx, there's still a ton to play for each week. But it's worth acknowledging that our form since Lee Knibbs came in has been very enjoyable indeed.

Sphinx had to dig deep again to keep out Westfields at Sphinx Drive in our last home game, and it was only at the very end of the game that our resistance was broken. Although the manner of the visitors' equalising penalty was disappointing, it was our own inability to make our chances count that cost us.

Ryan Harkin was the Sphinx man on the scoresheet in the 1-1 draw on a very heavy pitch. His second half goal was a left-footed curler of the very highest quality, and will be noted as one of Sphinx's goals of the season.

It shouldn't have been our first goal. Early opportunities went astray, and the best of the lot came from the penalty spot after the referee finally blew his whistle in response to Westfields' habitual risk-taking in their own box. Chris Sterling was unable to make them pay.

Westfields came for a draw and that target didn't change after they went behind. The second half looked like hard work for our team and, in truth, it was the lack of a wider margin that kept the visitors going until they saved a point with a penalty kick of their own. 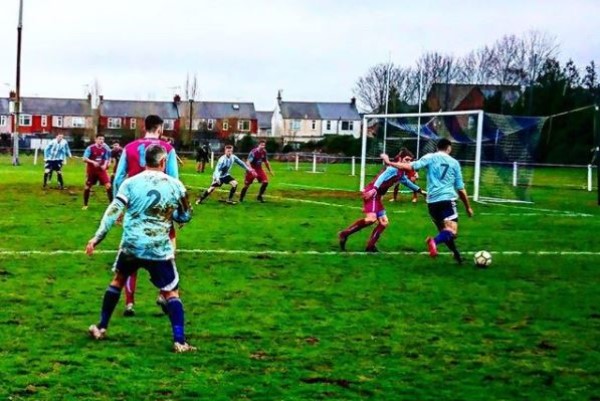 Other than a fantastic goal and another committed team performance to extend our unbeaten run to thirteen games, there was another positive. Seeing Jackson Downie and Luke Downes back in the matchday squad was a real boost, and when we see the best of them both it won't be long before we forget they ever went away.

Every unbeaten streak comes to an end and ours fell away last Tuesday. Just like the game before it, the game after our run was a 5-1 loss at the Victoria Ground, this time against Bromsgrove Sporting.

And, honestly, I was expecting the first loss to be a disappointment, a horrible, scrappy defeat against some mid-table side that caught us on an off-day. It wasn't like that.

Crucially, the similarity to our away loss against Worcester City ended at the scoreline. The Sphinx team put in a determined performance and showed quality, grit and potency against a side that were bound to enjoy plenty of possession and have some pretty sharp teeth of their own.

Sphinx scored early thanks to another belting Harkin strike, and weren't happy to have allowed the cross that led to the goal that pegged us back to 1-1.

We started the second half well, and, although the final score reflected something of a late collapse on our part, the match was put out of our reach by a pair of penalty decisions.

First, Sphinx were denied one (in fact, there's a case to be made that it might have been two) for handball. Then Bromsgrove were awarded one for a handball that was, from my perspective at least, indistinguishable from what happened at the other end.

Even at 2-1 down we weren't out of it, but a late third - aided by a foul on goalkeeper Jake Allingan, mind you - was the end of the contest. What followed was little more than a display of Bromsgrove's quality and Sphinx's tired legs. Differences in budget shape the margins at any level.

Tonight we host Highgate United in a rearranged match. In addition to the need to overcome last week's loss, this particular fixture has produced some poor results from a Sphinx point of view, not least our last couple of visits to Highgate and last season's FA Cup exit.

I'm hopeful that a Saturday afternoon off duty will have done Sphinx a world of good but they'll need to be right back at it again this evening.

The same will be true on Saturday afternoon when we travel to Boldmere St Michael's for our first league game against them this season. The FA Cup clash didn't go well, so there's unfinished business there too.

We've been settling scores and banishing unwanted records all over the place in 2017/18. There's no reason one setback should stop that, given the quality of the team we have right now.