The winter weather means Coventry Sphinx have only played once since our last home match, but Knibbo and the players have started to rebuild the form that wobbled after the end of our long unbeaten run.

Our home game against Worcester City a few weeks ago was a bit of an eye opener. Things like the character and style of a team, and a club's recruitment policy, matter to me. Every now and then we play a team that make me very glad to support the one I do.

Losing 1-0 to a side with their resources, albeit with a sloppy goal, was frustrating but left little reason to be disappointed with the effort the Sphinx lads put in.

Worcester's quality manifested itself in spells of pressure rather than any obvious difference in ability, and I thought we dealt with that well as a team throughout. Had Luke Downes' brilliant left-footed effort found its way inside the post rather than striking it, we might have got what we deserved.

Where Worcester did have an advantage was incidents like the one in the first couple of minutes, in which their eventual goalscorer fouled and then stamped on Callum Woodward without censure.

There were a few similar occasions, most notably when Jackson Downie was on the end of a stamp in the Worcester penalty area and when Charlie Faulkner was on the end of a gratuitous kicking only for the referee to inexplicably settle for a yellow card.

We learned to give as much as we got in the second half, though, and the physical battle began to tip in our favour. When Worcester finally had a player sent off at the fifth attempt, it was less cut and dried than the others that should have gone before him.

Consecutive away games at Westfields and Sporting Khalsa fell victim to the Beast from the East (uvavu!) and on Friday it looked for all the world like Saturday's visit to Lye Town would go the same way thanks to a soggy second half of last week.

The game survived and our hosts might wish it hadn't. Sphinx's 5-1 win was thoroughly deserved even if they were made to wait for the breakthrough. Jamie Towers, who was brilliant all afternoon on the right flank, scored a scruffy opener and Sphinx, tails up, were relentless in driving home their superiority.

In recent years there's sometimes been an aura around Lye. They've been difficult to beat, willing to push the physical battle right to the limit, and tough to break down and finish off. We had no such problems on Saturday - there's no question about which is the better side this season and ours made sure that remained the case.

Liam Cairns followed up by prodding in the second goal and Lye were floored by the third. A professional foul on Faulkner resulted in a red card for denial of an obvious goalscoring opportunity, and then we scored anyway. Ryan Harkin's curling free kick ended the contest but the scoring was far from over. 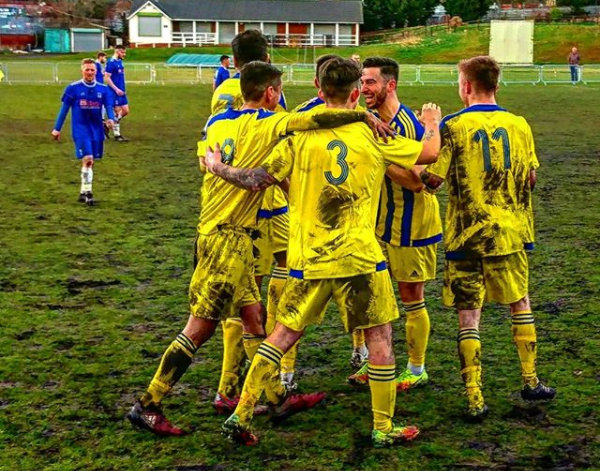 Faulkner and Harkin each finished neatly either side of Lye's consolation, which was put away well but just left a little negative note on an otherwise impressive result.

The most satisfying aspect of the game was how Sphinx went about their business on a pitch that certainly looked to be heavy going. They fought hard and didn't shy away from that side of the game at all, but they also got the ball down and played.

On a surface like that, it's difficult to play our game. But it is possible, and, when the players are at it like that, they can play anywhere.

It was a top performance. Harkin ran his socks off and Faulkner terrorised Lye's back line from the first whistle to the last. Towers was a class apart, and Woodward and Cairns relished the battle in the middle of the park. The defence, to a man, was fantastic.

There was a new goalkeeper behind them on Saturday. Jack Tregartha has come in from Coventry Alvis to cover the loss of Jake Allingan, whose injury brought an unfortunate end to a run of superb displays by the young stopper. Jake was a real find and has contributed enormously to our progress this year, and I wish him a quick recovery.

Tregartha slotted in nicely on his debut, distributing the ball well - and with urgency - and he didn't give Lye's forwards a sniff. Keeping Stourport Swifts similarly quiet this evening must be the aim.