Coventry Sphinx and the weather, eh? If it's not snow in spring it's supercharged April showers that destroy the schedule, and we've certainly had more than our fair share of both this season.

Last Saturday's game was one of the strangest we've had in my time supporting Sphinx. The match referee started his afternoon in the spotlight by telling the players at 2.40pm that the game was postponed after passing a pitch inspection a few hours earlier.

Judging by their response both sets of players wanted to play. Of course, we always want the game to go ahead as supporters as well. That's just the way it is. So relief was the order of the day when the referee reversed his decision and delayed the kick-off instead.

Now there are a couple of things to note, here. Firstly, the original decision to call off the match might have been frustrating but it wouldn't necessarily have been wrong. Secondly, the groundsman and volunteers around the club who worked so hard on and off the pitch to get that game on deserve our thanks. So thanks.

After that debacle we were treated to a perfectly adequate football match in which a scratch Sphinx side were marginally bettered by Rugby Town, the 3-1 scoreline very much on the harsh side.

Sphinx had chances either side of half time but it was the visitors who managed to get themselves in front in the first period. Our team battled on and looked to be keeping themselves in touch and keeping the game within reach when a red card for Callum Woodward killed the contest.

You can read my views on the red card and the number of blatant yellow card offences Rugby got away with in our 'COVENTRY SPHINX: TOO HOT FOR MATCHDAY!' bootleg programme at the end of the season. 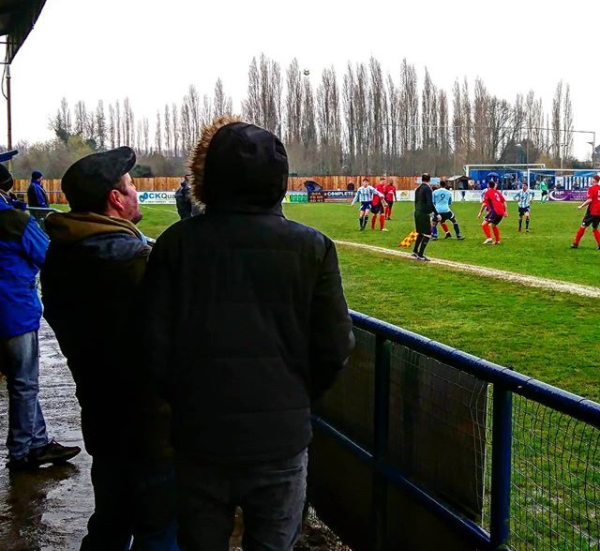 Rugby quickly doubled their lead and then got a third, which certainly didn't reflect the flow of the match. There were some positives, though. Youth team player Alex Bonkar looked lively on his debut and Reece Stowe was drafted in for his first start.

Ben Cranage made a name for himself too. The recent signing came on as a substitute in the second half and scored our consolation goal with a brilliant dipping drive from distance.

Before that our best chance was a crashing header from returning defender Louis Guest, whose effort from a set piece flashed agonisingly wide with Rugby's goalkeeper well beaten. Had we scored that we might have had a different outcome on the day. Fine margins and all that.

Easter Monday's fixture against Boldmere St Michael's never had a chance. After Saturday's marginal decision, another day or more of rain put postponement beyond question.

As always, it was important that a decision is made early so we could make other plans. Some supporters like to find another game to watch. Others could happily spend a bank holiday sitting on their arses. I did at least one of those things.

At the time of writing Sphinx sit in sixth place with one game in hand on Sporting Khalsa in fifth (six points ahead) and two games in hand on Rugby (three points behind). The places above us, including first, are starting to settle. The places around us are not. We still have plenty to play for.

This afternoon we welcome AFC Wulfrunians, who ended Monday in fourteenth. Fifteenth-placed Boldmere's visit to Sphinx Drive is one of their two games in hand on today's opponents, while every team between Wulfrunians and eighth-placed Long Eaton United have played fewer games.

If you're into this sort of thing then it might interest you that only South Normanton Athletic have an inferior goal difference to Wulfrunians and bottom club Rocester. They haven't played since their defeat at Coleshill Town on March 26th but picked up an impressive result against Heanor Town in the previous game.

We showed well in the reverse fixture this season but we know as well as any team that nobody in this division is a soft touch. We can't take anything for granted, and only our best will be sufficient today. Come on Sphinx!